Edo State Governor Godwin Obaseki and his Delta State counterpart, Ifeanyi Okowa, have described the dissolution of the Special Anti-Robbery Squad (SARS) as a testament to the people’s power.

Former Vice President Atiku Abubakar said the disbanding of SARS is in order.

Obaseki and Okowa spoke yesterday in statements by their media aides.

Obaseki said: “I appreciate the Nigeria Police Force for listening to the yearnings and concerns of the Nigerian people by disbanding its SARS unit, in response to the #ENDSARS protests.

“We are pleading with the youths to reciprocate the responsiveness of the police’s leadership by de-escalating the confrontations.

“As for the peaceful protesters arrested in different locations across Edo State, I have opened discussions with the state’s police command to effect their release.”

Edo governor also stated that the resolution of the face-off between the youths and the police was a step in the right direction.

Okowa said: “The Nigerian youth can take pride in the fact that they have won a major victory for the right to free movement and association without let or hindrance.”

Okowa and Obaseki commended Inspector-General of Police Mohammed Adamu for the disbandment of the squad.

”While commending the Police for not suppressing these protests, the disbandment of SARS is a visible demonstration of how government agencies should respond to the grievances of our people and their agitations for justice and good governance in a democracy.

“Finally, let me say that the IGP should not stop at disbanding SARS. That is but one step in the multiple steps required in carrying out a comprehensive reform of the Nigeria Police Force.

“Such a reform should cover matters relating to recruitment, training and welfare of the rank and file,” Okowa said.

The youths, who tried to maintain the COVID-19 protocol of wearing face masks, protested around the oil city of Warri.

For Makinde, who spoke in a state broadcast on Monday following the violence in Ogbomoso, he ordered the men of the state Police Command to take the back seat in the effort to curtail the violence.

He said: “The past few days have been ones of grief for the people of Oyo State. I cannot imagine the pain and frustration of the parents and families of those who have died or are hospitalised as a result of the actions of the Nigeria Police Force during these #EndSARS protests.

“As I stated clearly in my earlier statement, peaceful protests are a legitimate way for citizens to make their grievances known to the government and it is totally unacceptable for anyone to be hurt during such protests.

“It is unfortunate that men of the Police who were trained to protect the citizens have now turned their guns against unarmed citizens.”

Falana said: “Since Nigerians are entitled to the fundamental rights of freedom of expression and freedom of assembly guaranteed by sections 39 and 40 of the Constitution and articles 9 and 10 of the African Charter on Human and People’s Rights (Ratification and Enforcement) Act, the Authorities of the Nigeria Police Force should to provide adequate security for the aggrieved members of the public who are demanding for the abolition of the SARS through peaceful marches, meetings and rallies.

The activist lawyer, in a statement yesterday, expressed solidarity with the protesters seeking abolition of SARS.

He said: “But since similar measures did not end the SARS excesses in the recent past ASCAB is convinced that the knee jerk reactions of the authorities cannot end the institutionalised atrocities perpetrated by the SARS and other security agencies.”

He said: “In view of the concern recently expressed by both President Buhari and Vice President Yemi Osinbajo about the allegations of human rights violations routinely committed by the operatives of SARS the Federal Government must walk its talk by implementing the recommendations of the Presidential Panel on SARS reform. Furthermore, the Governing Council of the National Human Rights Commission should be reconstituted by the President without any further delay.”

Falana said it is the duty of the state governors to jointly exercise police powers with the president.

He regretted that state governments have failed to supervise the Police and other security agencies operating in their jurisdiction. 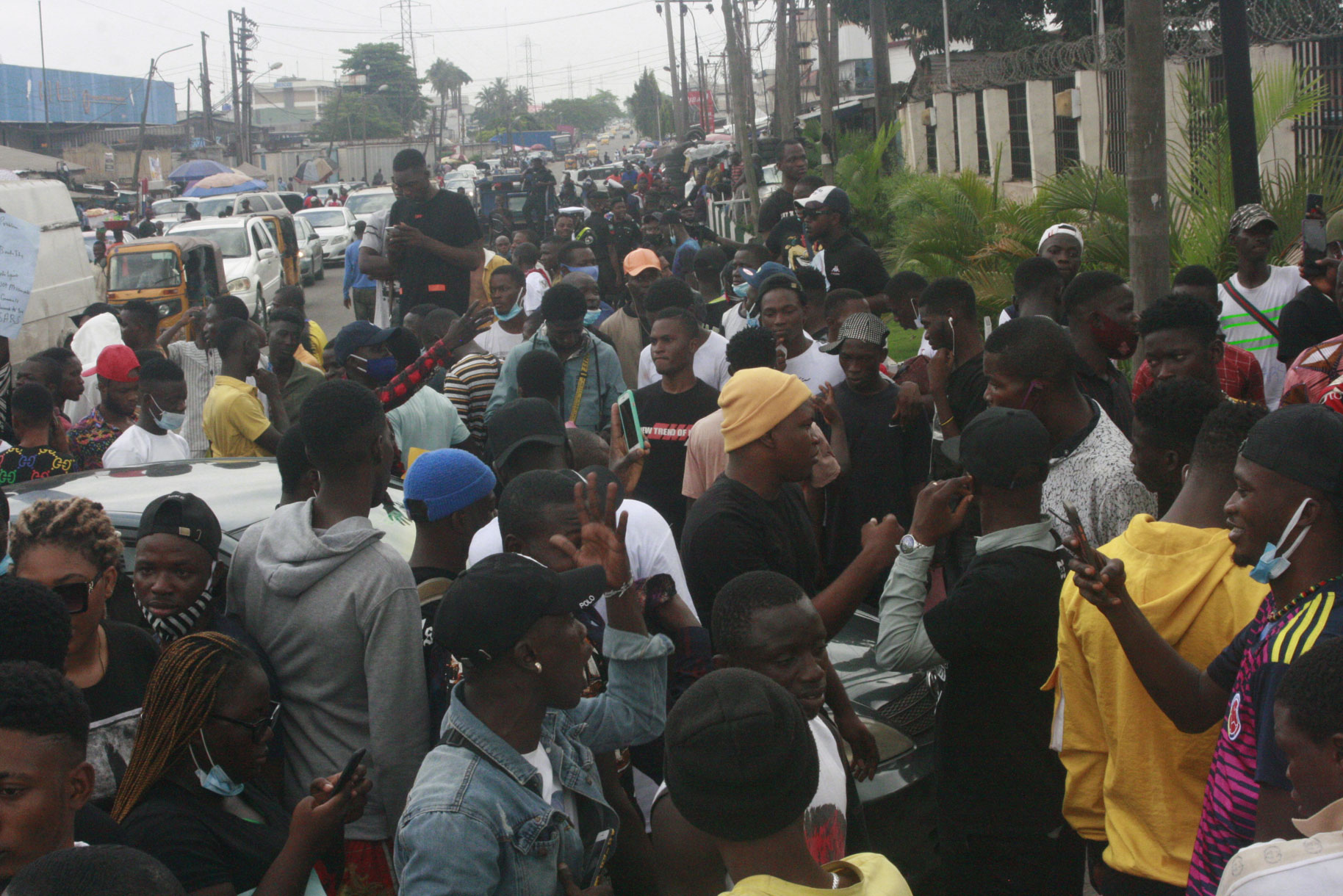 #EndSARS protesters on Monday visited the headquarters of Vintage Press Limited, publishers of The Nation in Lagos.

They came with a message for President Muhammadu Buhari and police authorities: end police brutality now.

They said the alleged extortions and harassment of youths by SARS operatives must end immediately.

He said: “I appreciate you for the peaceful nature of this protest. Let me say that The Nation Newspaper is with you.

“We will make sure that we tell the relevant authorities that the police should operate within confines of the law, that not all Nigerians youths are yahoo boys, that the facts that you are on dreadlocks doesn’t make you a yahoo boy.”

In Ilorin, the Kwara State capital, placard-wielding protesters marched through major streets of the metropolis and obstructed human and vehicular movement for some hours.

Some of the placard at yesterday’s protest read:  “End SARS now”, “Say no to reformation of SARS”, “Police protect us, police stop killing us”, “The only SARS we want is SARS on the beat”, “Stop killing our youth. Stop killing our male child”.

The protestors converged on the popular General Post Office area after meeting with Deputy Governor Kayode Alabi at the Government House on Ahmadu Bello Way.

Receiving the protesters on behalf of Governor AbdulRahman AbdulRazaq, Alabi assured them that their complaints had been heard.

The representative of the protesters, Olushola Olayemi, urged the state government to lend their voice to the dissolution of the police unit.

Their leader, Seyi Adelaga, said: “We are here in a peaceful protest today to tell Governor Adegboyega Oyetola, that we want an executive pronouncement of President Buhari to disband SARS. Yesterday, the IG pronounced that they are disbanded but we are not agreeing with his position until there is an Executive order to that.”

Addressing the protesters, Governor Oyetola, who was represented by the Secretary to the State Government, Prince Wole Oyebamiji, said the administration  would channel their demands to appropriate quarters.

“We are here to tell you that we are aware of your plights as youths and as Nigerians.

“We have listened to your demands and we shall do everything possible within the ambit of the law to address the issues as raised one by one.

“We will present your requests to appropriate quarters as part of efforts to strengthen peace in the State.

“As a government, we will continue to guarantee the security of lives and property of the citizens and we shall not leave anything to chance.

In Nnewi, Anambra State, traders expressed joy over the disbandment of SARS across the nation.

They described the development as long overdue, advocating for the reformation of the regular police to give them a human face.

Speaking on behalf of the traders, the Chairman of Fairly Used Motor Parts Dealers Association, Mr Chinedu Enyeribe recounted his personal encounter with the outlawed security operatives, noting that the development was a big relief to both traders and non-traders alike.

The leader of Nkwo Nnewi Butchers Association, Chief Kirian Okafor, noted that the aims and objectives backing the creation of SARS had long been defeated.

The police in Rivers State have commenced removal of all structures of the Special Anti-Robbery Squad (SARS) in compliance with the directives of Inspector-General of Police Mohammed Abubakar.

A statement by the Police Public Relations Officer (PPRO), Nnamdi Omoni, said Commissioner of Police Joseph Mukan ordered immediate dismantling of such structures during a meeting with his management team and Commander of SARS.

Despite the dissolution of the Special Anti-Robbery Squad (SARS) by the Inspector General of Police, Mohammed Adamu, on Sunday, the #EndSARS protest continued in Abuja on Monday.

This paralysed vehicular traffic in the area as impatient motorists made U-turn to avoid getting caught up in the resultant gridlock.

Commuters avoided the axis due to the protests.