Rumblings in NPFL: Unresolved riddles over contract of players, coaches

The International Federation of Football History and Statistics (IFFHS) early this year ranked Nigeria Professional Football League (NPFL) the 57th national league in the world for 2019 trailing the likes of Tunisia (15), Morocco (17), Egypt (30), Angola (48), South Africa (50) and Zambia (55) in the continent. Just this month, the continent’s top football-governing body-Confederation of African Football (CAF)-also rated the NPFL  eighth on the continent behind yet again   Morocco, Egypt, and Zambia.

According to CAF, the rating employs a point system based on how clubs from respective countries have performed in the two major club competitions over the past five years.

Incidentally, Nigerian clubs have had mixed fortunes on the continent in recent times, with NPFL teams struggling to get to the crucial stages of the CAF Champions League and Confederations Cup.

Apart from not knowing what players earn in NPFL, many clubs are also fond of owing players and coaches despite huge money released by government which happens to be  the owners of most NPFL clubs .

For some inexplicable reasons, most of these clubs hardly disclose the worth of their players’ contract talk less their wages as obtainable in other African countries for instance.

For purpose of this investigation on why there is so much secrecy surrounding  the emoluments for NPFL and coaches , it was like squeezing water of stones as most major players in the domestic league declined comments and few ones  that responded did so under the guise of anonymity.  For instance, a foremost coach who had handled several NPFL clubs and a stint with the national team, blamed lack of transparency in players and coaches contract on nothing but this on insincerity of club management.

The tactician as usual, pleaded anonymity equally blamed such trends on pressure from associates of the players and coaches.

“I think the reason why most clubs in Nigeria don’t disclose players and coaches sign-on fees and salaries is because of the insincerity of those in charge of the clubs,” explained  the vastly experienced tactician that has handled several NPFL Clubs including Enyimba.“  Most of them see the clubs as another way to enrich themselves to the detriment of those who sweat it out on the pitch.

“Apart from this, you can hardly know the amount released to them by the owners of the clubs which most often, are state governments.

“All these happen time and again because of the weak structure of most of the clubs in the NPFL as they are owned by the state governments.

“Look at those that manage the clubs, they are either family members of the government or party chieftains who were rewarded for their loyalties.; so from the beginning, such clubs are set up to fail and it is based on this that those in charge rip-off the players and coaches with undisclosed sign-on fee and salaries.

“Basically the structures of most of the clubs were set up to encourage fraud and financial impropriety particularly in the NPFL.

Speaking further, the coach who also had stints with the Nigerian national teams’ set up, further blamed societal pressure as another chief reasons why there seemed to be oath of secrecy as far as   contract of players and coaches is concerned: “Most of the players are not even ready to disclose what they are earning because of pressure from relatives and friends.

“Unfortunately in our society, immediately people know how much a player is earning, there will be pressure from several quarters with demands and this alone will endanger the life of such a player.

“So this is another reason why even the players and coaches are satisfied with this trend of secrecy in the financial details of their contracts.”

Meanwhile, the head coach of Lobi Stars, Kabiru Dogo , concurred that the ownership of teams makes it impossible for teams to disclose financial agreements with players and coaches.

Dogo was quoted as saying recently  that it would be impossible for Nigerian league players to determine what they earn based on the financial status of most of the states-owned clubs.

The tactician admitted that Nigerian players earn substantial salaries and other allowances cannot be compared with what the overseas teams pay as most clubs in Europe and the Americas are owned by private corporate individuals and big companies who are ready to invest and pay players huge sums of money. 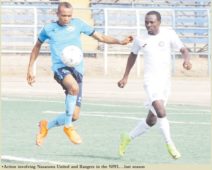 “These days, the NPFL players’ wages are called enhanced salaries by the states, who own the clubs. The players’ salaries are not announced because the states’ governments determine what the players get; this is unlike Europe where investors finance clubs heavily,” Dogo declared without pulling punches. “As you can see in Nigeria, due to the fact that most of the time allocations are not released early, players are not paid on time.

“This is unlike what obtains in Europe because some players get their money every month while some every week. I believe Nigeria will attain such level with time,” he noted

Speaking on the same premise, a player from the former CAF Champion League winner, Enyimba of Aba, who refused his name in print, said the players and coaches prefer to keep their earnings secret because of the prevailing security situation in the country.

He offered: “With the level of kidnappings and other crimes in this country, footballers will become easy targets if the criminals know what we earn.

“I can tell you that such clubs like Kano Pillars, Rivers United and Enyimba, among others, pay good salaries and other dues. But of what use will it be to make these earnings public when players don’t have as much protection as their counterparts in Europe.

“Those states that owe their players regularly are not supposed to float clubs. This is because if they knew what sports can do for their economy, they will operate differently. These states still see sports as recreation and therefore treats it as such,” he added.

A former NPFL team coach who equally craved anonymity pointed out that the major reason salaries and sign-on fees of players and coaches remained undisclosed is because of greed on the part of the club management who are not truthful to the sponsors of the clubs.

He noted that some club management officials inflate the amount they negotiated with the players and coaches with a view to short-changing their sponsors.

“What I have to say regarding that is that some club officials are not truthful to their employers. They feed fat from the emoluments of players and coaches. They do not give an accurate record in order for them to benefit from it,” the coach told NationSport.

“They know the amount they negotiated with the players and coaches but they will now go ahead to pad it up for them to get bogus allocation from the government. Whatever that is remaining after they settled the team becomes theirs.”

He also added that some club management officials cut players’ salaries at will without reason, insisting that this had caused rancour among various teams in the past and still exists till now.

“We know that it is statutory to remove taxes from the salaries but there are other charges too that adequate explanations have not been provided to the players” he said.

A former player of Nasarawa United and Abia Warriors who claimed he was on a monthly salary of N350,000 and was signed for N1.5 million at both clubs before he quit, stressed that they left discussion about their transfer undisclosed because of the negative backlash that may likely follow.

He said lack of adequate protection and security for players make it difficult for players to gladly talk about their salaries and sign-on fees in public.

“Some players were last season kidnapped while on their way back to their base at the end of the season. They went through the most gruelling experience in the midst of their kidnappers. Imagine if details about their contract are available for all to see, they would have suffered more agonies,” the midfielder began in an interview. “We are playing the so-called Professional Football League and we need to behave and act like professionals. Security of players and coaches must be priorities to enable them feel free to open up a little more.”

Another NPFL player who plays for Heartland said that the inconsistency and unnecessary delay in the payment of negotiated emoluments also discourage the players from disclosing their contract.

The defender said that the players also have their salaries slashed to the tune of between N100, 000 and N200, 000 every month by the team management without any reason.

“A lot of things have to be put in place if we are to become more open with the press. A situation whereby a player cannot predict the salary he gets at the end of the month is not ideal. We had players in my team whose monies are being deducted unjustly,” the striker explained to NationSport. “What is it that we want to disclose when we don’t even know what we will get at the end of the month; I believe this could be among the reasons why players are keeping every information about their contract private.”

However, another top coach who has worked with Enyimba and some clubs in  the Northern part of the country  was of the view that a lot can be changed , affirming   that the introduction of the club licencing could help check the excesses of some club officials who have not been upright to their players and coaches.

He said that the club licencing registration which has been put as a condition for the registration of players ahead of the new season would help put things in proper perspective even as he enjoined the LMC to be forthright without sacred cows in the discharge of their duties.

“I believe that the club licencing registration as requirements for the club to register for the new season is a step in the right direction and it will help curb excesses of club management,” he said.” With that,  all clubs must provide adequate Information which will be available to the public in due course.”

Lampard reacts to Mount being ‘unhappy’ about ...