The Nation is DAME Newspaper of the Year

THE Nation showed class at the weekend, winning the Newspaper of the Year at the 29th edition of Diamond Awards for Media Excellence (DAME).

The Nation Editor, Adeniyi Adesina, was also adjudged as Editor of the Year.

This newspaper beat The Punch and Vanguard to clinch the top prizes.

The Punch Editor Ademola Oni and Vanguard Editor Eze Anaba were the other nominees.

The Punch and Vanguard were also first and second runners up in the Newspaper of the Year category.

“The two silver medals are from Investigative Reporting and Newspaper Design, whilst the bronze comes from Editorial Writing, Judiciary and Lagos Reporting.

“With this outing, The Nation narrowly edged out The Punch by one point. It is the second time in six years that The Nation is winning this category.

“It also ends the five-year record of the Punch winning the Newspaper of the Year prize.

“Established July 31, 2006, The Nation has grown in stature and influence. Ladies and gentlemen, I present to you, The Nation, the Newspaper of the Year.”

Multiple award winner, Olatunji Ololade, a recipient of over 27 awards for journalism excellence, continued his winning streak at DAME.

He won the Child-Friendly Reporting category, with the entry: “Missing in Conflict” published on October 5, 2019.

He beat Chioma Obinna of Vanguard and Kolapo Olapoju of The Cable.

Ololade also won the Lagos Reporting category, in which The Nation had two nominations.

His winning entry was entitled: “The Sinking Houses of Adeniji Adele.”

The Nation’s Taiwo Alimi was a nominee in the same category.

He was named the second runner-up with the entry: “We live in perpetual fear of land grabbers.”

Juliana Francis of the New Telegraph came third in the category.

The Nation won the Judiciary Reporting category, in which it had two nominations.

The first prize went to Gbenga Ogundare, who won with his entry: “The long, tortuous road to justice for rape victims”.

Deputy News Editor Joseph Jibueze, a five-time winner of the category, was the second runner-up, with his entry: “Are judges, lawyers undermining ACJA provisions?”

Oladimeji Ramon of The Punch was the first runner-up in the category.

The Nation Associate Editor Adekunle Yusuf was the first runner-up in the Investigative Reporting category.

His entry was: “Horror of Nigeria’s dysfunctional emergence medical services.”

Yusuf was the grand prize winner at the Wole Soyinka Centre for Investigative Journalism in 2017.

The category was clichéd by Taiwo Hassan Adebayo of Premium Times with his entry: “How child labour boosts milk production at Friesland Campina in Nigeria.”

David Eleke of ThisDay was second runner-up the category.

The Nation was named first runner-up in the Best Designed Newspaper category, won by The Punch.

This newspaper was the second runner-up in the Editorial Writing category, which was also won by The Punch. BusinessDay was the first runner-up.

The Guardian won the Child-Friendly Medium, beating The Sun and Daily Trust.

Bayo Akinloye of ThisDay won the Agriculture Reporting category, beating Afeez Hanafi and Jesusegun Alagbe, both of The Punch.

He beat Gowon Akpondor of The Guardian and Ajibade Olusesan of Saturday Telegraph.

Niyi Oyedeji of the Nigerian Tribune and Kunle Adebajo were the runners-up.

The prize for Nutrition Reporting went to Obinna of Vanguard, who had two nominations in the category. Dayo Ojerinde of The Punch was the third nominee.

Adesina dedicated his awards to God and to all members of staff.

“I’m highly excited because I’m just 16 months in the saddle and this happened,” he said, as he hoisted the award plaque.

“I’m dedicating this award The Managing Director/Editor-in-chief of The Nation Victor Ifijeh. I thank him for his leadership; to the editors, who work tirelessly, and the reporters who pound the streets for stories, because without them, this award will not come. This is a collective triumph,” he said before the large audience.

The judges recommended 13 prizes this year, down from the 18 awarded last year.

According to Lanre Idowu, Editor-in-Chief, Media Review and member of DAME board of trustees, “the organisers would not award prizes whose credibility cannot be defended.”

He added: “We regret that no prizes are recommended for the broadcast sector either because we had issues with the quality or paucity of the entries. It is a subject we will be discussing in the New Year with stakeholders.” 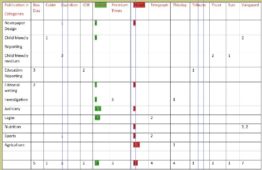 Idowu said the report of the DAME panel of judges indicates that much of what was reported in 2019 adequately addressed the Nigerian condition.

Journalists, he said, focused on issues of security, governance, and the search for social justice.

He said: “From the shortlisted entries, our journalists mainstreamed food security—the challenges of keeping farmers on the farm, how technology can leverage food security, and why the state needs to do more in encouraging better approaches to cultivating the land.

“The quest for justice rings loud in the call for a shortened duration of court hearings and increased deployment of technology to fast-track the court process.

“There is a palpable concern for waste in the use of state assets, the need to prepare better for retirement after service.

“There is the usual interest in corruption—material corruption, corruption of values – which weakens the foundation for good governance and social harmony.

“The concern for better service delivery and respect for human dignity resonates in the stories on medical emergencies, better treatment of detained suspects in police or prison custody, and how child labour contributes to corporate profitability.

“The plight of the Nigerian child remains concerning but worsened in an environment of strife and insecurity. In the failure to connect good nutrition in infanthood with rounded development, many are sentenced to a future of stunted growth.

“The search for meaning in our politics is reflected in the frustration with poor standards, slow pace in decision making, and the confounding decisions when they are eventually taken.”

Idowu spared a thought for what he called a growing impatience with criticism and the resort to wanting to wield the big stick against the media.

He said: “The media may have its excesses, but it is not short of patriots who make regular positive interventions in the affairs of the country.

“The government will do well to see them as partners in progress and shun this practice of fishing for enemies where they do not exist. Propaganda is no replacement for governance, which the people are truly hungry for.”

We must keep the dream

Idowu stressed the essence of the annual award and the need to keep it going in-spite of, especially tough year occasioned by the pandemic and general economic recession.

“In the face of the trying period, it is essential to separate the wheat from the chaff by honouring our commitment and enterprising media professionals. We believe that by so doing we are renewing spirit in our society. We are encouraging hope for a greater tomorrow and we are keeping alive the zeal for a better practice. It is important to keep the award going because it brings hope, joy, fulfillment and recognition.”

While recognizing the sterling contribution to Nigeria media by John Momoh of Channels Television, with the Lifetime Achievement Award, Idowu called for sober reflection and the celebration of media personalities that died this year.

According to Idowu, the event happened in an era of great concern in the land – concern about health, politics, traffic, security, living and our humanity.

He said: “These concerns are so grave that thinking about them alone can arrest one’s zeal for life; or indeed kill one’s dreams. In the preparations, these concerns featured prominently in our hearts.

“Do we have to hold the 29th DAME? If it holds at all, must it be physical? Why not just announce the winners and decorate them next year alongside winners for the 30th edition, a landmark, and an occasion for an enlarged celebration?

“These were some of the recommendations made to us. The more we thought of them, the more we asked: Who knows what will happen tomorrow that you begin to project for next year? Who thought of Covid-19 this time last year? Who anticipated the EndSARS protest? Who imagined the insecurity in the land will linger for so long?

“One of the enduring lessons of Covid-19 is that try as much as we can in this journey of life, but there is a Great Architect of the Universe whose ways we cannot always foretell.

“The more, we thought of these questions, the more convinced we were that we must not become prisoners of fear; we must not abandon our dreams because of challenges. Rather, we must face these challenges with courage, wisdom, and restraint.

“And so, we resolved to hold the 29th DAME in a managed setting, by following the advisories from the health experts, which entails pruning down the number and taking all the precautions prescribed.

“It was also important to sustain the idea of giving the media one special day of acknowledging the important role they play in society as pathfinders of meaning, and guardians of public morality.”

Idowu noted the role of professional journalists in an age of social media where most people claim to be one.

“In the face of the increasing menace of fakery in news dissemination, in the face of the technological liberalisation of access, which enables everyone to be a reporter, editor, and publisher, it is critical to continue to stress the vital role that trained journalists play in serving their publics with news that you can trust.

“It is essential to separate the wheat from the chaff by honouring our committed and enterprising media professionals.

“By so doing, we are renewing faith in a better society; we are encouraging hope in a greater tomorrow; we are keeping alive the dream for a better practice, and we are sustaining the DAME dream because it brings joy, hope, fulfilment, and recognition,” he said.